Demitra out with torso injury plus roster updates

Share All sharing options for: Demitra out with torso injury plus roster updates 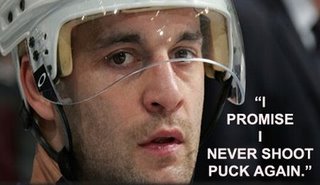 You know, it's funny. I was commenting on my semi-live blogging of the Canucks-Hawks game that Demitra was showing a little more grit as the game went on. Then all of a sudden he wasn't on the bench anymore with an undisclosed injury. How ironic. Demitra is no stranger to injuries. Apparently, he hurt his ribs after taking a shot! It's true! I guess he's been passing too much lately and didn't have his shooting muscles up to snuff. (Utter obscenities here) So if Salo is Glass Joe, what is a good nickname for Demitra?
But this is a positive. Yeah, I know there are plenty of people out there who love Pavol with blind faith, but let's be honest: he hasn't even come close to showing his potential here. Not yet anyways. So the Vancouver Province mentions today that Kyle Wellwood could be called up from Manitoba to be the 2nd line center replacement. That means that he would have to clear re-entry waivers to make the Canucks squad. What are the chances he does that? Well, given all the bad press he has received for being out of shape I'd say those chances are quite high.
I would say that Michel Ouellet (who, like a commentor said, has 6 points in 4 games with the Moose) should get a chance, but the problem with him is that he's a right winger and I don't know if he ever plays center. Vancouver's lousy line 2 needs a natural center, which is where Wellwood fits the bill.
Let's hope Wellwood gets the ball rolling on Line 2 and shuts up Mike the Yankee Wellwood hater! (haha)

I see on the CDC forums that the Canucks may be putting Matt Pettinger on re-entry waivers as well to fill in for Darcy Hordichuk, who will be out 7-10 days with a knee injury after colliding with Ryan Johnson. Pettinger is red hot for the Moose right now. Let's see if he also clears re-entry waivers. He should.
This still prompts me to wonder when Ouellet will get a chance.

So we can assume Rob Davison will fill the #6 position on the Canucks' blueline in Salo's absence then? Probably.