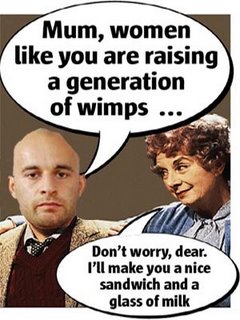 Demitra, (and this should not be shocking to anyone) will miss up to a month with torn cartilage in his ribs. He sustained the injury from either reaching for the puck or shooting it. Either way, Glass Joe lives! Does this concern me? Not one bit.
It means that Kyle Wellwood may keep his rightful place as a line 2 senter for an extended period on time. I sure hope he continually impresses there.

Elliot Papp of the Vancouver Sun has some sad stats of the Canucks' road trip posted in an article today. Here is an excerpt:

Yes, it's a cruel world. And the Canucks' performance on their just completed six-game road trip - featuring four outright losses in the last five - was ghastly.

You allow your foes, especially those in your conference, to pick up that kind of salad and you'll be compost come playoff time.

Coaches love it when their team plays with the lead. In the six road games totalling 364:21, the Canucks led for 16:33 - with 14:52 of that coming in one game against Detroit. They never led for a second against Washington, Buffalo and Columbus.

Unreal, huh? I'm not completely worried yet. Wellwood is our saviour, and the Canucks should play better at home. Papp mentioned that the Canucks are perfect at home this season scoring 6 goals and allowing none against. Nice sarcasm! That was the 6-0 killing of Calgary in game 1.
Check out more of Papp's article here. Then pour yourself a drink.