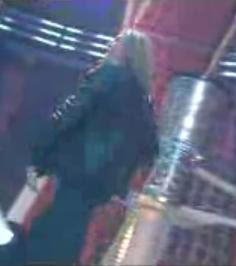 Saw this at Puck Daddy's joint, of course:

Joe Elliot should not have cleared the air on the Def Leppard website about why he put the Cup upside down on the table on stage during the regular season opening night concert.

"I will, as always, take full responsibility for what happened because I have big pucks. However, someone at the NHL should have known better and informed me first instead of keeping the Stanley Cup under lock and key until the last minute. The practice run the day before with a coffeemaker went swimmingly because it, like every other sporting cup I've ever seen, was wider at the top than the base. Ironic isn't it that after that night's gig, a NHL insider told me that long ago the Stanley Cup was also designed to be put down that way!!!
Like most of my fellow Brits, I'd never seen it before until it was handed to me sideways by which time I had a 50/50 chance of getting it right. Whoops……"

Wow Joe. You really cleared the air on that. I totally believe you. Now, don't you have another shit glam song to write? Piss off!
(Actually, I liked Hysteria.)
On the flipped side of the issue...who really gives a shit if he put it upside down? It's just a moment of mockery for Elliot and that's about it. If Hayden Panettiere can hump it and lick it, then Elliot can put it upside down. Both can be looked at as insults to our Lord God Stanley. It's just that one is hotter than the other.