Comments on the first 2 regular season games in Europe

Share All sharing options for: Comments on the first 2 regular season games in Europe

-Looks like about 35% of each game will be filled with power plays. Unbelievable and pathetic. But it isn't going to change so I must stop complaining about it. All those power plays really exposed a couple of issues however:

1. The Sens need a power play quarterback whose name isn't Kuba.
2. The Penguins are really going to miss Gonchar and Whitney.

-Is Gerber the man? He looked shaky at times. This prompted Mike Milbury to suggest that the Sens should be targeting Nikolai Khabibulin. Kelly Hrudey disagreed because he thinks Khabibulin is no longer the dominant goalie he once was. I would say the Sens need a higher calibre goalie than Alex Auld to push Gerber, but the Bulin Wall is out of their price range.

-Sid Crosby bringing out the hits? Impressive! He made Chris Kelly pay twice. Speaking of Crosby, he was mostly flanked by newcomers Satan and Fedotenko. Like I said in my predictions, those 2 are no Malone and Hossa. Not even close. And that my friends makes me happy, because I hate Pittsburgh.

- I never knew that Spezza coughed up the puck so much. But MacLean, Milbury and Hrudey pointed it out after period 1 and then Spezza delivers the buffoonery in overtime by getting stripped of the puck by Miiiiiiisterrrrr Kennedyyyyy.............................Kennedy. Kennedy storms into the Sens' zone and bags a weak one on Gerber.

-All those new faces in Tampa Bay are going to take time to click as a team. 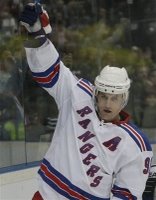 -I know Lightning coach Barry Melrose was bragging about the Lightning being a fun team to watch this year, but by being more entertaining they allowed 41 shots on goal. And they lost.

-Markus Naslund scores the Rangers' first goal of the season? Oh no...please don't make me look like a fool Markus. He looks pretty happy out there doesn't he?

-Scott Gomez is everywhere. What a player. He reminds me of a bee stuck in a jar.