Share All sharing options for: Capitals kill the Canucks 5-1 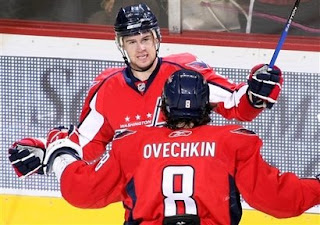 Maybe it's the fact that the Canucks' lousy schedule comes into play now, or maybe it's just that Washington really is this good, but this game is so one-sided that I regret paying the $12.95 for it on Canucks PPV.
The Capitals are taking it to the Canucks in every way. Their puck control is near perfection. They are hemming the Canucks in their own zone for the majority of the game, and the Canucks just can't get it into a higher gear.
Kyle Wellwood has not done much tonight except cough the puck up leading to the Demitra penalty and the Caps' 2-1 goal and also get hammered by Ovechkin for viewing pleasure.
Yes, our 2nd line continues to suck. They are soft. They miss the net. They are perimeter. But the rest of the club is not exactly in sync either.
After 2 periods the Caps are outshooting the Canucks 25-3. Good god.
Nylander has 3 points. Ovechkin has none. You can keep AO off the sheet but there's plenty of other guys that can do damage in Washington.

PERIOD 3: LET'S JUST GET THIS OVER WITH

This a very good time for AV to do some line shuffling and that is exactly what he's doing.
Sedin-Sedin-Demitra
Pyatt-Wellwood-Raymond
Burrows-Kesler-Hansen
Rypien-Johnson-Bernier

- It seems as though the Canucks are aware that they could beat an old record of the fewest amount of shots in a game by Vancouver in their history. The current record is 8, which happened at the hands of the Devils in 1996. The Canucks currently have 5. They are now shooting the puck from anywhere.

- You can tell that the Caps have not made a lot of changes to their roster. The way every line moves the puck around you can tell they've played together for a long time. That is not the case in Vancouver... yet.

- Sanford is playing well in relief of Luongo.

- How many goals is Mike Green going to score this year?

- If you took a shot every time Demitra-Wellwood-Raymond coughed the puck up or missed the net, odds are you can't even walk right now. It's hard to pick on them when the whole team stunk it up tonight.

- The good news is that we play Detroit next. Why is that good news? Because the Canucks play hard against the Wings. It is also 3 days away, so the team can forget about this one and re-energize to play the Champs.

-BOXSCORE / GAME SUMMARY FROM YAHOO
So, which Canucks players had the worst +/- rating tonight? Take a guess.