Canucks vs Ducks: "It is Halloween. This is scary."

Share All sharing options for: Canucks vs Ducks: "It is Halloween. This is scary." 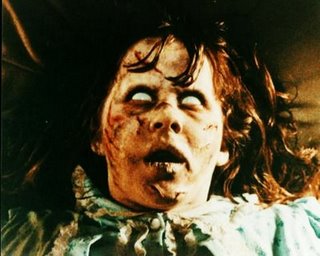 Nicely coined by John Garrett after the Ducks scored 3 goals in the 2nd period to erase a 3 goal deficit and tie the game 5-5. Insanely enough, the Canucks scored 4 goals on 7 shots in the middle frame and even chased JS "Super Sized" Giguere from the crease. The first shot Jonas Hiller faced went in. It was 5-2. The Canucks had stuck in this one even after taking a freaky amount of penalties. Ah, it was going to be a romp over the surging Ducks wasn't it?
Oh by the way, the Ducks had 17 shots in the 2nd period.
It's a goal-fest out there. Let's see what happen in the 3rd.
Wellwood may have skills and all, but he is being more of a hindrance tonight. His pass to nobody in particular led to the Ducks charging up the ice and scoring their 4th goal.
Great game otherwise, if you like banging your head on the table in disgust and shock.

-The Canucks have really responded well, but Jonas Hiller is looking mega sharp now.
-I hate the Ducks, as a team, as the enemy. But I can't help but respect the skills of Getzlaf, Perry (4 assists so far), Selanne (2 goals, 1 assist so far). Shorty and Homer were right: Selanne looks like the same Teemu that scored 76 goals in his rookie season. It really is amazing how the Ducks' top players coming around has really put the team in the win column. It's helping me in my work pool as well. I've got 4 Quacks and am moving up the ranks.
-There's a guy with a great costume behind Luongo. He has a knife chopped into the top of his head with blood running down his face and all over his white shirt. Good stuff.
-"This game could not get any hairier" says Shorty after the Ducks almost score a shorthanded goal. Then the Canucks charge up ice and Bernier scores under Hiller's arm.
6-5 Canucks! 2 for Bernier! Loving it!
-Now the Ducks are having penalty problems. 3 in a row in period 3. Make them pay, Nucks. Nope. Ducks kill it.
-I just visited the site Girl With a Puck, and in her pre game post Finny threw in that image of Luongo laying on his face after the Ducks scored the OT goal to eliminate the Canucks in the 2nd round 2 years ago. Now I'm hoping Luongo shuts the door and the Ducks lose even more. I think I saw her at the game on TV. She was wearing a Taylor Pyatt Canucks jersey! Ah, the truth comes out.

- Geez, this Canucks team just cannot hold a lead. The Ducks pull Hiller and score second later: go figure, Corey Perry from Selanne. 5 points for Perry. 4 for Teemu. 6-6. How fitting. The unholy number. If Perry can get in on a Ducks goal, 3 sixes will figure into this game and Satan will spawn from center ice, grab Vigneault by the suit and hang him from the rafters.

-No goals in OT. Bieksa coughed the puck up twice in his own zone on the same shift but the Ducks could not capitalize. You have to like how the Canucks have responded after blowing both leads since the 2nd period. At the same time, this is not the same Canucks team of the recent 2 years. They shouldn't blow those leads in the first place. They get way too scrambly in their own zone. They have to relax and tighten up. This has been an ongoing problem this season.

-Selanne: backhander, save by Luongo.
-Wellwood: wow. He scores. About 5 moves in close.
-Getzlaf: nice one! Louie missed the poke check. 1-1
-Burrows: Stoned by Hiller
-Perry: Easy stop by Luongo.
-Raymond: Hiller stayed with him and makes a great save.
-Morrison: Save Luongo! That was close. Nice toe save.
-Kesler: Hiller got his toe on that one.
-Carter: gamble by Carlisle and it doesn't pay off
-Bernier: tried to go 5 hole but stopped by Hiller.
-Kunitz: Whoa, almost. He out did himself
-D Sedin: Fancy try, but Hiller didn't bite.
-Pahlsson: Shoots wide.
-Can we put Wellwood back out there?
-Edler: 5 hole attempt and stopped
-Rob Niedermayer: Luongo stops him on his ass. The Ducks have the right idea
-Pyatt: What a glove save by Hiller!
-Beauchemin: a slapshot, but Brian Rolston he is not.
-Bieksa: fake slapper but puck rolls of his stick.
-Pronger: Pad save by Luongo.
-H Sedin: another fancy pants play that doesn't work
-Moen: hit the post!
-Johnson: another great glove save by Hiller! Wow.
-Montador: Oh, Luongo just stopped that one along the ice
-Salo: slapshot and stopped by Hiller. Shorty called that.
-S Niedermayer: Oh captain! Save by Luongo!
-Ohlund: Give him a raise! Ohlund scores top shelf!

CANUCKS WIN AFTER 13 ROUNDS OF THE SHOOTOUT!