Canucks trade Krajicek and Simek to Lightning for Ouellet and O'Brien

Share All sharing options for: Canucks trade Krajicek and Simek to Lightning for Ouellet and O'Brien 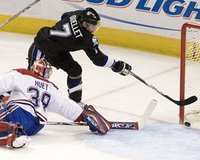 Alright this comes as a bit of a shock. I'm trying to digest this. I know the Canucks are deep on defence, but I am a huge Krajicek fan.

"They (management) told me that Tampa wanted me for quite some time," Krajicek told CKNW in Vancouver. "They said I would play more minutes there and in every way it should better for me."


This comes down to Gillis wanting even more offence and Tampa needing a top 2 defenceman.
We know Ouellet has a lot of skills and was a victim of the Lightning having way too many forwards. Last season, he missed several games due to a shoulder injury, but he still managed 17 goals and 36 points in 64 games. Best of all? He was a +11 on a lousy Tampa team. He is a right winger by the way. You know what that means..... somebody may not be wearing a Canucks jersey in the near future. Is it Kyle Wellwood? Apparently he was given a vote of confidence from Mike Gillis on some radio station this morning.
I hope it's Taylor Pyatt. God, his lack of skill irks me, and he is pencilled in as a 2nd line winger. He may be hitting the waiver wire soon.
Then again, TSN did say that O'Brien will report to Vancouver immediately and Ouellet will go to Manitoba. That doesn't necessarily mean somebody else is not getting moved.
Shane O'Brien needs 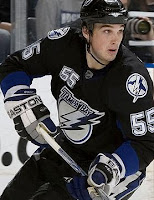 no introduction. Especially if you are familiar with goons. The thing is, O'Brien is better than a goon. He had 4 goals and 21 points in 77 games las season. Tack on 154 penalty minutes to that. But he fell out of favor with John Tortorella and was benched for the last 5 games of the season.
Mike Gillis promised he would change the team and he continues to do so. Let's just say he continues to address the "scoring issues" by getting Ouellet. Krajicek will get more playing time in Tampa and now Alex Edler will get more playing time in Vancouver. He has earned that.
Canucks.com has a video up of interviews with Gillis and Vigneault in regards to the trades. Michel Ouellet will start the season in Manitoba and as Gillis puts it: "He will have to earn a spot on the Canucks' roster like everyone else has."

What does this mean for Ohlund and his contract negotiations now? Is management planning on keeping him? He sure as hell was playing great in preseason.

- Ouellet highlight video from his days with the W-S and Pittsburgh Penguins. Sweet hands.

- Ouellet on making it to the NHL.

- O'Brien vs Boogaard. Gets his ass beat in, but he definitely doesn't lack courage, and stands up for his teammates.

we just got tougher to play against, O'Brien's a mean piece of business infront of our net

we've got plenty of D that can carry the offensive load, Edler, Ohlund Salo and Bieksa are all very capable 40+ point D-men

we needed that extra bit of grit, it really bothered me to see Travis Moen ( a legitimate tough guy) drop the gloves with Ohlund -- now we have another deterrent that allows our skilled players to be skilled players
and in the fact of Ohlund, not to be worried about making a big hit from time to time, we've got the guys now to cover his back - 82 Nucksfan


I'm wondering if Gillis might try Oulet wtih the Sedins and, if there's chemistry, maybe moving Bernier to the 2nd line?
This might be the beginning of the end for Pyatt in Vancouver.- babych

I had the same thought actually. Bernier looked a little lost last night. Today, Bernier said: "I need to figure out what they are thinking and when they are doing something," Bernier, 23, said after Monday’s practice.

"They are very good at getting the puck in the corner, protecting the puck. I used to always be the guy to go get the puck. Now I don’t need to do it all the time. What I have to learn is to go somewhere (and wait to) get the puck and have a good scoring chance."So he'll need more time to adjust.

This is a terrible trade, we could have picked up Ouellet for free on waivers and O'brien is just another depth defenceman. I really believe Krajicek would have benefited from this counter attacking game we are playing right now. Terrible trade IMO.

At least the Nucks traded him to a team where he'll get more icetime and we got tougher in the process. Remember how badly the Ducks were kicking our asses in the playoffs 2 seasons ago...