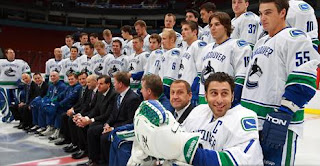 In continuation of the joke that an NHL goalie cannot wear the "C" on their jersey during an NHL game, Roberto Luongo was sporting one for the team photo. Marketing ploy or mockery? I like the look on his face. Good to see Shane O'Brien made it to Vancouver for the picture.

Image from Canucks.com from a John Garrett article on his analysis of the team going into this season.