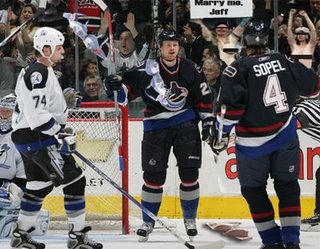 It comes as little surprise that Cowan is one of the odd men out with the acquisition of Darcy Hordichuk. Cowan shouldn't leave town without a proper "thank you." Yes, he lost most of the fights he got into, and his stone hands failed him most of the time. But that one brief period in March of 2007 Cowan scored a hand full of goals (5 goals in 3 games I believe) and Bra Power was born, although short-lived. He was affectionately named Cowan the Brabarian. I doubt that most Canucks fans will ever forget that.
Video of Bra Power's birth. Good times! Nice pass by Bulis too.

Nathan McIver only played 18 games in a Canucks jersey, scoring no goals and no points. But he can fight, and that is why Brian Burke and the Ducks picked him up today.
A couple clips of McIver fighting:

-McIver fares much better against Aaron Voros in a Valentine's Day tilt.

Best of luck to both players and thanks for the memories.