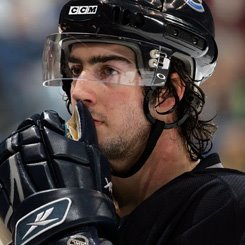 This is a great day. After a summer that seemed to go by so quickly I don't shake my fist to the air in disgust or dread the oncoming cold of winter. Why? Because the NHL regular season starts right when the weather cools and the leaves fall from the trees in my part of the world. Bring it on! Mother Nature can poop 10 feet of snow on us and drop the temperature to -20 celsius and I don't care. Just give me a warm room, a couch, a spiced rum and coke, and a 42-inch high-def TV with hockey on it and the rest doesn't matter.

The Canucks won 6 and lost 1 in OT in a terrific preseason run. Only so much can be read into that. Sure it threw the nay-sayers into a bit of a tizzy and yes, a lot of the preseason games looked and felt like preseason games. But not the Canucks-Flames game on October 1st. Sure, the Flames outshot us to hell, but Miikka Kiprusoff was not playing all that Kipper-worthy. Luongo was a god. The Canucks dumped the smoldering Flames 6-1 that night.
The same cannot be expected tonight. A much closer affair is to be expected. Then again, the whole Northwest Division is going to be close all year long in my opinion.

What to watch out for tonight:

- There will be a Luc Bourdon tribute pregame. Canucks players will be wearing his number during the pregame warmup. This is going to be a very emotional start to the season. Win this one for Luc and his family, boys!

- NHL.com states that the Flames have lost 5 season openers in a row. Impressive. Love to hear that. Let's make that 6!

- Boo Bertuzzi. Just do it. And pray he doesn't catch on fire tonight. 14 goals and 40 assists for Big Bert last year in Anaheim. Underachievement. Many predict a rise to power for Bertuzzi playing with Iginla. I reserve judgement on that. He has too many distractions in his personal life and has had chances to excel in Detroit and Anaheim and never did.

- All these new Canucks..... are they all going to gel right away or will it take a little time? I can't wait to see what Shane O'Brien brings. How long will it take Steve Bernier to click with the Twins? He just has to park his carcass in front of the net and clean up the garbage.

- So many questions to be answered in Vancouver. So many people have written them off this season. Myself, I have a good feeling about the direction this team is going.

Prediction: 4-3 Canucks in a shootout.