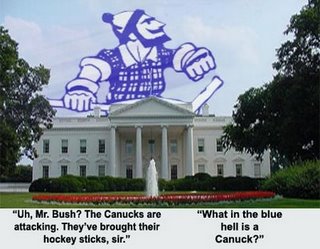 The Canucks cannot access the MRI's on Bieksa's leg today but Vigneault did say:

"We put him on IR and hopefully he'll be back some time later this week," Vigneault said.
"It's the scenario that, according to (the team doctors), it's a mild MCL sprain."

So that is good news, or, better than I expected it to be. Shane O'Brien will take Bieksa's spot. That's a good thing. Let's see what O'Brien can do with more ice time. He doesn't have the same offensive flare as Bieksa, but judging by what I saw from him after Bieksa injured himself in game 2, he is a steady defenceman who makes good passes coming out of his own zone. He is quite aggressive and gets in passing lanes effectively, especially along the boards.
Oh yeah, and he's mean.
Rob Davison is in for his first regular season game as a Canuck.
What could be a better Thanksgiving gift from our Canucks than for them to shut down Ovechkin and the Caps and beat them down? Amazingly, the Canucks continued to keep Jarome Iginla off the score sheet in the 2 games against Calgary. That is an impressive feat. Imagine how frustrated Ovechkin would get if we shut him down.
The Caps are 1-1 to start the season. Their win came at home. 8 goals for and 9 against. They allowed 7 against Atlanta in their season-opener. The Canucks have scored 11 goals and only allowed 4 in their first 2 games. 11 damned goals. These are good times.
How about Daniel Sedin being named 1st star of the week in the NHL? 2 goals and 3 assists in 2 games will do that to you. Nice work.
The Capitals are a less physical team than Calgary. But their skill up front is sick. And Mike Green has arrived as a points-scoring defenceman. The Canucks may counter by dressing Kyle Wellwood tonight. Darcy Hordichuk may sit. Makes sense.
I don't want to see a lot of Washington power plays tonight. Apparently they've been putting Ovechkin at the point with Green. That's potent. No thanks. Hope the Canucks stay disciplined.

Judging by what Caps coach Bruce Boudreau said today, he wants his team to buckle up defensively. Washington can play that way. So can we.
Should be a great game.