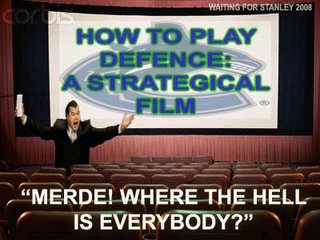 Finally, the last game of the Canucks' road trip that has seen the team be inconsistent in almost every area. Highs and lows.
The signs are there for this Canucks squad to succeed at a more consistent basis but it needs to find an identity, road-weary or not. I was saying after the loss to Chicago that I miss Alain Vigneault's "trap" system of the previous 2 years. I don't like seeing our defencemen get caught up ice over and over again, or all players running around in their own zone, or having skilled players that don't back check. To me, that was the Marc Crawford and his predecessor's regimes.
But now I'm confused. Mike Gillis brought in Pavol Demitra under the impression that the Canucks would play a more wide-open style this season. So now the Canucks play more wide open and surrender more goals against. The fault lies within all the players including Luongo for defensive lapses, but to some degree, this is what you get when you "open up." If the Canucks scored more goals per game consistently then maybe they would have won a few more road games. But this team still isn't scoring enough. Not everybody is rolling. Some that were rolling to start the season (top line) are now mostly silent.
My confusion escalates when I read about Ohlund saying this:

"It would be easy if we could just point at one thing and correct it. The main thing is we can’t get scored on four times a night and expect to win. Scoring goals is great. I think we have a lot of guys this year – maybe more than last year – with the potential to score a lot of goals. But, at the end of the day, I don’t think our identity is to win games 7-6 or 5-4."

Ok, well then one or two things have to happen:
1. They play more wide open, increasing chances against, naturally, and Luongo has to stop more pucks.
2. They tighten up defensively and don't send 2 forecheckers into the zone and the defencemen pinch less, plus Luongo has to play better.
A contributing factor is that the season is still young and the team has new faces that need to adapt. At the same time, don't you think Alain Vigneault would rather play the trap still but is under fire from his boss to do otherwise? That's my read on it.
Yeah, everybody kept saying over the past couple of years that we can't score, but is it worth turning into the late 1990's version of the Canucks just to achieve a higher goal total? Where's the balance here?
Maybe it will come in time. At least line 3 is still there. Right now I'm getting flashbacks of the Crawford Canucks and the Leafs squads of recent years with all of these odd-man rushes against. I would rather see teams have a hard time entering our zone with 4 guys lining up along the blue line or higher defensive pressure in the neutral zone to squeeze off passes. In other words: shut down mode.
Am I off base? Tell you what, every time there is an odd-man rush against us tonight or a Canucks d-man gets caught pinching and the puck is turned over, take a good shot of whatever alcohol it is you're drinking. If you find that you can't get up off the couch anymore, the Canucks probably lost and you've passed out in your own puke. If you can stand up and still make it to the fridge for another, the game is either tied, we've won, you've developed a sickeningly high alcohol tolerance, or you drink cheap low-alcohol beer.
PS: Can we get our power play back on track? We need that. Let's see if the Great Kyle Wellwood will help.

No Demitra, Salo, Hordichuk or Rypien.

For Columbus: No Peca, Malhotra, Torres (yay), Boll, and maybe Pascal Leclaire who got an owy on his thumb.

The Spineless Jacket Weasel Huselius is leading the team in scoring, to the chagrin of poolies everywhere. I wasn't expecting him to flourish either.
Watch out for a guy named Derik Brassard.

Prediction: a hard effort on their last road game, the sleeping technology pays off (see previous post), and the Canucks win 3-2, despite all of my angry ranting.