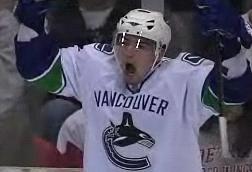 Not surprised here. The Canucks came out with a vengeance against the Wings as we always do. I know it was the Alex Burrows show, but I continually was watching Line 2 tonight and they somewhat came through.
- Demtra: 1 assist, 3 shots on goal and over 19:00 played
- Raymond: 1 goal, 2 shots, 20:00 played
- Pyatt- 0 points and 14:08 played.

Better play by Demitra, but it's no surprise that he plays better against non-aggressive teams. Same with Raymond. Pyatt however, is a bum. Face it.

Great game by Line 3 tonight. Terrific. Check out their stats here. God, I love Line 3. They should be promoted, but they are such a great checking line as well.
Notice how shitty Line 2 was in their own end? Terrible. That is becoming increasingly evident.
I think Steve Bernier has not found his niche with the Twins yet either. Maybe that will come.
Maybe we should drag Anson Carter out of the Swiss League. Oops, did I say that out loud?