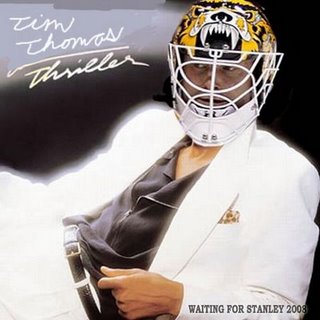 Depressing. And it is spelled T-H-O-M-A-S. Like Ray Ferraro was alluding to early in the game: "No save Thomas makes looks the same."
I was saying in the pregame that I thought the Canucks should shoot high on the Bruins' netminder but they did not do that enough. A point blank chance by Dank Sedin in the 3rd was shot along the ice and stopped by a sliding Thomas. It happened more than once.
But really, when Thomas is on his game, I find him to be a cross between Curtis Joseph and Dominik Hasek in their primes.
Timmy's shutout streak of 2 games continues against Vancouver.
One of the worst parts of this game is that the only goal the Bruins scored (Ryder) was the result of Luongo poke-checking the puck out of harm's way right onto Ryder's stick. Bango.. screen shot top shelf, and that becomes the only goal scored in the game. Alain Vigneault was upset over that play because a Canucks penalty was coming and Luongo touched it.

"The linesman blew it," Vigneault said, adding Luongo’s poke check wasn’t enough to blow the play dead. "It can’t just be a touch, it has to be possession."

Maybe. At the end of the day it didn't matter.

I thought the Canucks came out extra hard in the 3rd and really took it to the B's, outshooting them 13-9 and having so many chances. But Thomas was just so damned good.

Another bummer that plagued my mind all game long is the Bruins' defensive play. That was US over the past couple of years: 1 guy forechecks, 4 stay back along the blue line. They can really shut a team down when they have the lead. Hey Gillis, were you watching that? BOSTON has the skills to do some real damage this year by playing like that. And all of the players buy into it. Some call it boring, I call it effective.
End of story. Great game by Boston.

- Milan Lucic made a bit of noise in his return to Vancouver. He laid out a few guys and hit Luongo in the helmut with a bullet. He sure is a mean guy to play against.
But the Bruin who I am most impressed by is Marc Savard. This guy used to be a shitbag and a locker room distraction. Now he is a top NHL star who can play well at both ends of the ice.