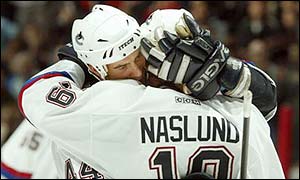 Todd Bertuzzi was quick to defend his buddy Markus Naslund in regards to the former captain's tough final years here and the verbal lacerations he received for it. From the Vancouver Sun:

"I think, the near the end, it got pretty hard on him," Bertuzzi said after a practice with his new mates at the Pengrowth Saddledome "And it wasn't deserved."

Too soft, too quiet, too European - Naslund heard it all in his final year as captain of the Canucks. All the while, Bertuzzi seethed on behalf of his friend, who scored 25 goals on a team starved for offence.

"That guy gave everything he had to that city," Bertuzzi said. "For a handful of people to disrespect him and call him out like that? I don't think that was something he was forecasting."

Hey, I'll take some resposibility for the things I've said about Naslund. But I stand by what I've said about his play and his performance as Canucks captain. It wasn't always pretty. Sure, Naslund learned how to back check under coach Alain Vigneault (and he wasn't terrible at it from what I saw), but too many times we saw him miss the net and not capitalize on chances and plays in order to bring his points total up. He was even given multiple chances with the Sedins. When a guy makes as much money as Naslund was and wears the captaincy, he will come under scrutiny in Vancouver and B.C. It goes with the turf. Damn it, we worship hockey here.
Was Naslund terrible? No. He just wasn't good enough.
I think some of the anger from fans came from Naslund playing in the shadow of Trevor Linden as well. Not only as a captain, but as a person. Pretty tough shoes to fill. Most of the fans wanted Linden to be the captain ever since he came back.
More anger comes from the fact that we are sick of waiting for a Stanley Cup. Mediocrity doesn't sit well with us. Naslund did not "give everything he had" to this city and team last season especially. Bertuzzi didn't either before he left the Canucks.
Are we, the fans and the media too hard on Canucks players? Maybe we say things that are cruel at times and can hurt people's feelings, but guess what....NHL players sign up for the job. It goes with the turf of being a superstar, and a well-paid one at that.
It's all in the past now. We are better off without both of those guys. They had their time here, some of it great, some of it lackluster. Time to move on.