Willie and Luongo nearly go unnoticed on the Sea Wall

Share All sharing options for: Willie and Luongo nearly go unnoticed on the Sea Wall 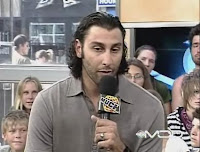 According to Canuck defenceman Willie Mitchell, just one fan in this supposed hockey-crazed city noticed superstar netminder Roberto Luongo minus his distinctive long hair.
"We went for a run on the seawall the other day and I think only one person recognized him out there," Mitchell chuckled on Wednesday. "So I think the new haircut is going to do Roberto a lot of good as far as being in the city and sliding under the radar." If hardly a soul recognized Luongo, how did the equally high-profile Mitchell escape notice? "It was one and one," responded the Port McNeill 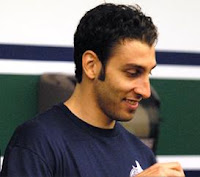 native. "One person recognized him and one recognized me." Mitchell, by the way, did admit his goalie pal appears "a little more responsible looking, maybe it's being a father" with his different 'doo. His favourite, though, remains the un-gelled, long curly look that Luongo sometime sported before he slicked it back.
"I think that's his best," said Mitchell, who couldn't resist poking fun at Bobby Lou.

I had major long hair in the early mid-90's and then cut it off around 2000. The difference between the two on how people perceive and treat you is somewhat astounding.
I think Luongo looked pretty cool with the longer locks but whatever. As long as he stops the puck I really don't care.