Share All sharing options for: Wellwood draws praise from Vigneault 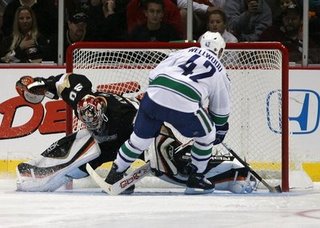 During the shootout between the Canucks and Ducks I was hollering at Vigneault through a TV screen to put Wellwood on the ice to get a shootout chance. When Salo took a turn I was really irate. I thought there was nothing Wellwood could do to impress AV. Salo misses, Wellwood gets a chance and bags the winner. What moves this kid has.
Now he has gone from a picture of him overweight and recovering on the pages of a Vancouver newspaper and jeers from fans to eye-opening praise from the coach.
From the Vancouver Sun today:

"He is now at acceptable NHL standards, which from where he was coming from the last two months is remarkable," Vigneault said of Wellwood's latest fitness testing done on Monday.

Wellwood has dropped eight pounds in the last week. He had been told by the team that his fitness level had to keep improving if he was to remain with the Canucks.

"I am at 189 [pounds]," Wellwood said after Monday's practice at General Motors Place. "That's exactly where I want to be."

Wellwood has had considerable help from the Canucks in shedding some pounds. He has worked closely with strength and conditioning coach Roger Takahashi and has been put on what could be described as a NHL version of the Jenny Craig diet.

The Canucks are supplying Wellwood with many of his meals.

"They are making sure I get the meals that I need so I can just come to the rink and play hockey," Wellwood said. "There's a lot of vegetables. Apparently, I can't eat a lot of things that normal guys get to eat.

"I have eliminated everything but lean meat and vegetables. If you want to lose weight pretty quickly, just eat vegetables and lean meat. They are doing a good job of making it tasty here."

Off the menu are some of Wellwood's former favourites like pasta and sub sandwiches.

"Those are things I just can't eat," he said Wellwood has three points in three pre-season appearances with the Canucks, which ties him for the team lead. He has also scored a pair of shootout goals.

Good work. Like I said before, I am a big fan of Wellwood. I know he has sickening skills. Now he's becoming a potent weapon for the Canucks. Let's see if his progress continues. Keep it up, Kyle.
He's not guaranteed a spot on the Canucks yet.
Check out the rest of the article here.

In case you missed the shootout, and Wellwood's brilliance...here it is: