Trouble at the Leaf house?

Share All sharing options for: Trouble at the Leaf house? 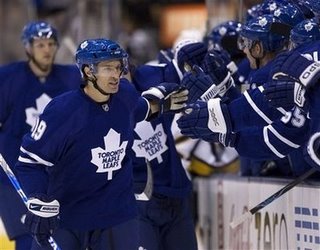 From The Toronto Star:

The strangest of sights met Leafs CEO Richard Peddie's eyeballs: Empty seats. On a night when the tickets were given away free – this being the so-called Fans First Game, a much-publicized pre-season giveback to the embattled loyalists of a hockey team that hasn't been to the post-season in a quadrennial and counting – there were no-shows by the thousands.


Said Peddie of the empty seats:

"It's just classic. Anything that's given away free, people don't attribute as much value to it," he said. "Anything free, you won't get 100 per cent (of) people showing up."


He could be right. But let me copy/paste a few reactions to the article from Leaf fans.

Its a pre-season game for a team that gutted all of its talent for nothing in return. NOTHING. They've lost draft picks! Is it really surprising that people weren't coming.
Stay away people. Thats the only way to force change. MLSE loses earnings and Peddie will be gone, and then someone will fix this wreck.

Could it be that people in Toronta are finally getting smart? Leave the seats empty and maybe the team will be forced to get better. After all, this is year 42 of the rebuilding plan. Nonetheless, CBC will show them just about every Saturday on Hockey Night in Toronta!

We (the fans) are the only ones to blame for not getting a much better team long ago.
We have been faithful to the point of blindness when giving our money away to this organization!
The ONLY ones who have benefited are the investors! Do THEY care about the leafs? HAH! Not likely. They only care about making money.
Bottom line people: Stop going to the games. Stop buying the product. Stop wasting your hard earned money on this good ole boys club.
When they (the fat cats upstairs) see a loss in revenue, you can bet they will do something!
Money talks! Speak up Leaf Nation!

OK, hold on a second. First of all, this Leafs team could surprise people this year. A playoff berth? A very distant possibility. But I'm not shining up 30th spot for them either.
It just cracks me up that Leafs fans are so angry. I was a Leaf fan since 1977 and still am in a sense, just not as die-hard as I used to be. If Leaf fans ever had something to complain about it is not the present. The Harold Ballard years were definitely worthy of yelling and kicking a hole through your TV.
But not now. Cliff Fletcher has returned to clean up the mess that was left by his predecessors years ago. It was Fletcher who saved the team in the early 90's. Now he's doing it again.
It is going to take patience for Leafs fans to fully see Fletcher's plan. Gutting the team was the right start. Bringing Ron Wilson's defence-first mentality was long overdue. Flogging Bryan McCabe was genius. Patience. Something Leafs fans are not good at. It's that very lack of patience that has fucked this team over the past decade: bringing in big-name free agents and pissing away the youth. Oh yeah, the the fans drooled over the UFA's like a bum over a bowl of soup. You can't do that anymore. Not when the team has lacked success. And not under a salary cap system.
If you look at the current team, you'll wonder where the scoring is going to come from. Answer: By committee. And they'll all buy into Wilson's system. The Leafs aren't going to roll over and play dead this season. No way. So stop being so negative! Sure, if you get kicked in the sack enough times you start wearing a cup (in reference to not winning a Cup since '67). But Fletcher has the right idea here and needs to be trusted.
The fans will fill the seats this year. It's Leafs hockey. It's Canada.
Oh and by the way, the Leafs won 7-4.