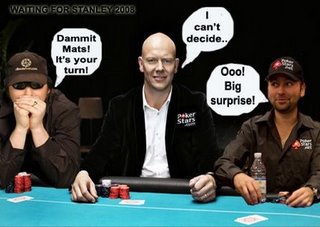 From the most popular poker site on the web:

Hockey icon and former Toronto Maple Leaf captain Mats Sundin has just joined PokerStars as one of its international celebrity ambassadors. You'll soon see him both online at PokerStars under the name "MatsSundin" and live at PokerStars-sponsored events, including on the European Poker Tour which kicks off next week in Barcelona. A long time card player, Sundin said, "I have always enjoyed playing poker and partnering with PokerStars gives me the opportunity to challenge myself and explore the full potential of my game. I believe the fighting spirit I’ve developed as a hockey pro will really help me at the tables."

Sundin is also an ambassador for the United Nations’ "No More Land Mines" appeal and will be donating his profits earned at the poker tables to charitable and good causes.

"I am very proud to become an ambassador for PokerStars. It means I will be more able to fulfill my personal ambition of working with charities around the world and I will be donating 100 percent of the money I earn from playing poker to charity," he said. "For me, the combination of excitement and challenge in poker, plus the potential to support good causes is a win-win situation."

Well that would be fun to play against him at the online tables. Heckle him a bit. Take all his chips.

From an NHL news conference:

Sundin has played 17 seasons in the NHL and he says it's getting tougher each year.

Sundin did mention that if he wanted to retire then he would have said that already. No decision is coming anytime soon. But I'll take a stab at a guess and say he signs with the Leafs, Rangers or Avalanche after Christmas.
At least I can move on now and finally start talking more about other hockey matters. There was no way I was going to stop covering the Mats stories this summer until something solid came up from Mats himself.

Above image is from Pokerstars.com.