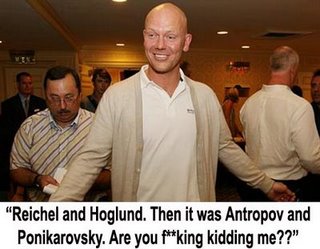 Ooo, a little stab at Sundin by Wilson. He wasn't 100% blaming the coaches and GM for the Leafs' futility in the past few years, but the leadership from the players.

"As an outsider coming in, I would say I was concerned about the Leaf leadership the last three years," Wilson said, when asked about leadership for the upcoming season. "Failing to make the playoffs, it didn't always rest 100 per cent on the coach and general manager's shoulders. You have to look at the leadership in the locker-room, and it has not been there. The team has struggled in third periods, and rarely does that come from a coach -- that comes usually from your top players.
We just have to go in a new direction. There is going to be opportunities this year for different people to lead as a group. It won't be shouldered by one or two players -- we will try to get everybody to act like leaders this year."

It looks like Wilson is challenging every player in the locker room and he HAS TO, because the team is gutted and rebuilding. What is he going to do, put the "C" on Nik Antropov? It's going to be a long, trying year in Toronto.
More on that story here.

Sundin's not the only person with his leadership abilities being questioned. Check out this article from The Gazette that questions Saku Koivu. My god. Koivu skipped the team's inaugural golf tournament because he's practicing in Finland. The French media is all over him. Oh, and they would like it if he would try to learn a little more french. I think he should learn Parisian french. Now THAT would piss off those jackasses wouldn't it? No love between Quebec and France.