Share All sharing options for: Preseason game #1: Canucks 4 Oilers 3 (SO) 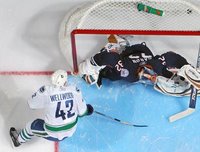 Yes, it's just pre-season, but it was still enjoyable to watch the Canucks take this one. I'll keep this in point form.

- The Souray-Visnovsky combo will be feared all year long, no doubt about it. If Souray can stay healthy he is going to put up serious numbers.
His 25:47 of ice time was second only to Mattias Ohlund's whopping 26:34.

- All the talk surrounds Kyle Wellwood and his conditioning. He assisted on the Canucks' second goal and bagged a beauty in the shootout, showcasing his talent, yet you could see from AV's post-game comments that he's not entirely thrilled with him. Even Ryan Walter said that Wellwood is a "long ways away". That doesn't bode well for the former Leaf. He had better develop a 6-pack and score 3 points per game or he probably won't make the final squad.
He's a small guy too, and really got pushed off the puck easily. Stick him on the PP and he's gold though.

- Cory Schneider was the 3rd star of the game and deserved it. We have a real "keeper" in Schneider. He seemed nervous to start out but really settled down as the game went on.

- For a guy that led the AHL in scoring last year, Jason Krog did not dominate. He looked alright, but not a real standout.
However, his shootout goal was just sick.

-Matt Garon is large and fully capable goalie. He should take over the #1 role in Edmonton.

-Opinions on Don Taylor as a play-by-play guy? I'm not sold on that concept. Sorry Don.