NHL 09 simulation has the Stars winning the Stanley Cup

Share All sharing options for: NHL 09 simulation has the Stars winning the Stanley Cup 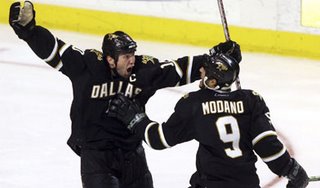 Sure, this is a pathetic thing to post. But strangely enough, I think the Stars are going to win it this year as well. I'm not on that Wings repeat bandwagon.
Watch what Richards does after a full year in Dallas. Mike Modano is more possessed than he has been in years. Anyway, for the simulation:
-No trades
-No injuries
-No Sundin
-No Forsberg
-No Shanahan

Canucks finished in 8th spot but lost to the Sharks in Round 1.
The Stars defeated the Penguins in 5 games in the Finals. Satan, the Lord of all things evil actually put up a bunch of points during the season and the playoffs. But it was Brendan Morrow who won the playoff scoring race and the Conn Smythe Trophy.

Oh, and NHL 09's "Be a Pro" mode is damned cool, but it has its issues. I was getting demoted in Manitoba and told by the coach that I was just "going through the motions". So I was delegated to 3rd line duty. Only thing is, I was leading the team and the AHL in scoring. Lame. However, with 2 weeks left in the season, the Canucks called me up to play on their 3rd line. I excelled there and was eventually promoted to top line center with Demitra and Dan Sedin. The Nucks went right to the Finals and Dank won the Conn Smythe. Good times.
Any of you own NHL 09 yet? It still blows my mind how good it is.

That's enough useless info for you. Then again, there isn't much going on in the NHL right now anyway. However:

- Glen Sather may be giving Mats Sundin a deadline to make up his mind. That could be this Tuesday, according to one NY reporter. Look for Shanahan to be re-signed this week. Sundin ain't doing or saying squat.

-Hayley Wickenheiser is complaining that she has to wear a visor playing in Sweden. The guys don't have to, so why does she? I guess there are some stinky rules in Sweden about females in hockey. Apparently she didn't have to wear one playing in Finland. Run that article through a translator. Just once I'd like to watch her play with the guys in Europe. I hope nobody is going easy on her. Not to be cruel, but she is playing in a men's league after all.