Share All sharing options for: NHL 09 is top notch 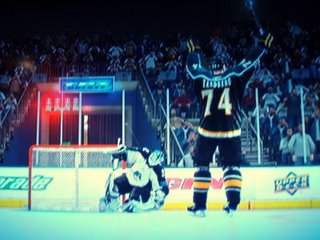 Yeah, baby. That's a picture of me scoring as a member of the Manitoba Moose! NHL 09 really has delivered this time. The graphics are even smoother, the hits are massive and finally look different, the fighting engine has finally changed, and the game has never been a more authentic NHL experience.
I just bought it for the PS3 yesterday and have already spent a great deal of time with the new "Be A Pro" mode. Awesome stuff. You create yourself as a player and the mode puts you on an NHL teams' affiliate of choice. You have to work your way up from the 3rd line on the affiliate team and hope to get a chance to play for an NHL team. I've only made it to the top line of the Moose but have not been called up to Vancouver yet. The mode has it's quirks, but it will only get better every year. (Why does the coach give you hell for taking a bad penalty when you've just won a fight and got the crowd going?) But the first-person camera mode is great as an option. It feels like you are actually sitting in the bench and being one with your team. That is....until you triple-shift, trying to get some points up to make your player better! Then it's me first team second.
So much new stuff. EA Sports is to be commended. If you have not bought this game yet, you're missing out. It leaves NHL 08 in the dust...and NHL 08 was pretty damned good!

A full list of game reviews can be found here.
Personally, I think this is the best hockey game in a long time.