From Craig Custance (and tip to Kukla for finding it):

In case you were wondering, I'm firmly on board the Columbus bandwagon. No, I don't think they're going to win the Stanley Cup anytime soon, but I believe in Scott Howson and what he's doing with the Blue Jackets. I'm already on record as saying Columbus will make the playoffs this season, and you'll see it again when our NHL preview comes out in Sporting News Magazine. But still, I wanted a little reassurance.

I got it today from Michael Peca. He flat out said that this is a 100-point team right now in Columbus. Last year, they had trouble getting the puck to their forwards. That's been solved with a revamped blue line. Rick Nash has never had an equally skilled player to get him the puck. Enter Kristian Huselius.

You know what? I can only describe this article and Peca's prediction with a Photoshop image: 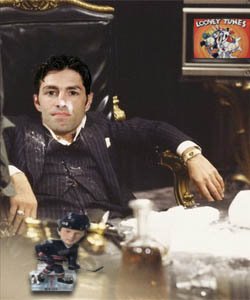