Mike Brophy: Sundin has no desire to win

Share All sharing options for: Mike Brophy: Sundin has no desire to win 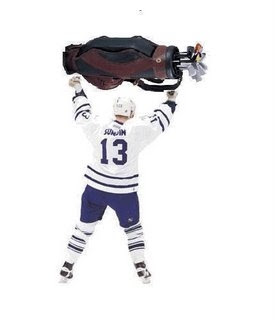 Sundin's indecision and indifference has become downright boring. Imagine the fuss if we were talking about a superstar and not just a point-per-game guy. Don't get me wrong; I'm certain the 37-year-old Swede could still help a number of teams, but let's be honest; we're talking about a player whose best years are long gone. And if his uncertainty about whether or not he'll continue playing is any indication, you have to wonder if his heart will ever be in the game again. Never mind the $20 million for two years he turned down from the Vancouver Canucks. When you thumb your nose at Bob Gainey and the Montreal Canadiens, who are legitimate Stanley Cup contenders and will be celebrating their 100th anniversary season this year, it says a lot about your desire to win.


Further in the article:

Also, I have never bought into the notion that he is a great leader. Too often during his tenure as captain of the Leafs there were negative forces inside the dressing room that Sundin sat by quietly and allowed to wreak havoc. A true captain would have put certain third- and fourth-liners in their place for the good of the team. Sundin was never a rah-rah kind of guy.

Let me just say something here. This article smells like bitter and angry backlash. So Sundin snubbed the Canadiens....I would too, had I played so many years for the Leafs. Like I said at the beginning of summer: he would be forever shamed in Leafland if he did that, and he loved playing in Toronto. There's some honor in that.
Questioning Sundin's desire to win is questionably reasonable. Same with questioning his leadership ability. Does Brophy have sources in the Leafs' dressing room telling him that Sundin was not a "rah-rah" kind of guy?
I have a perspective: how about the players that Leafs' management kept filling the holes in with were GARBAGE? Like I had on one of my Photoshops: Reichel and Hoglund and then Antropov and Ponikarovsky. Underachievers...every single one of them. Sundin's best times were with Doug Gilmour, or especially with Mogilny and Gary Roberts. But they just didn't have to commitment from all of their teammates or the coaching staff to play team defence. I don't know... 35 goals and 74 points in 83 career playoff games is pretty impressive. Sundin has been clutch plenty of times. That is leadership on the ice.
Make no mistake, I think Sundin sitting out stinks but I can't totally fault him. I would be dissillusioned after playing in Toronto through all that crap.
And who was bashing Niedermayer and Selanne last year? Oh sure, they had just won a Cup, but so fucking what?
I'm not going to lose patience with Sundin and his decision-making. If he comes back to a contender half way through the season...COOL. In the meantime, GM's in tight spots need to move on.
Oh, and if Carey Price shits the bed this season, then Hab fans can kiss their contender tag goodbye. The Habs are not a sure shot to win, with or without Sundin.
You won't get a Sundin-hate piece out of me. I am beyond caring 100% about what he does. But there is something that has got me thinking that he will return when he is watching NHL games from his couch. Until then, it is time to move on. Nothing has been said that was not said before.