Share All sharing options for: Metallica-The Day That Never Comes video / new album out this week 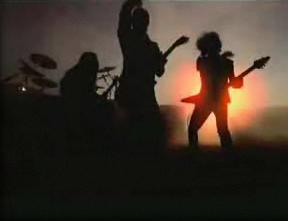 I have been a Metallica fan since 1988. Some dude sitting next to me in English class had his walkman on, and I could hear this crunchy fast music faintly coming out of the headphones. I nudged him and asked him what he was listening to. He said "Metallica man, check it out," in his stoner-sounding voice. He gave me the headphones and I put them over my ears. What I heard was the machine gun-firing song "Blackened" from the album And Justice For All. I had not heard a thrash song in my lifetime yet because I grew up in a strict Christian home. But I fell in love with thrash music and especially Metallica that day and have been loyal ever since.
That means loyal through the commercialized sound of the Black Album, the new direction of Load and Reload, the S&M album, and even the St. Anger toss-together thoughtless album.
Well, judging by the sound of their first single, "The Day That Never Comes", it sounds as though I have reason to celebrate again. It has the feel of "Sanitarium." It also sounds like they are combining everything they have ever done into one song, and perhaps their whole album. That's fine by me. This song goes about 4 different directions before it ends over 8 minutes later. The more I listen to it, the more I like it.
Thank god Hammett is allowed to solo again! Love his work on this song.
"Cyanide", another song on the album leaked all over the net, is growing on me as well.
Yep, I'm going to be driving down the street banging my head to this shit in celebration of a return to form of my favorite band.
Below is the video for "The Day That Never Comes".

The album is called Death Magnetic and will be in stores on this Friday, September 12.

Rolling Stone gives it 4 stars out of 5. The released an album review here.

Other songs from the album:

-Death is not the End (live). Metallica let this cat out of the bag a long time ago. I love this tune.

- Volturous. Sounds like punk. But it gets crunchy. Awesome.

-There are 6 tracks to check out at Metallica.com.