Share All sharing options for: McCabe and a 4th round pick in 2010 officially traded to Florida for Mike Van Ryn

I have waited years for this day to happen.

You're so stupid Florida. You're so stupid. But thanks!
Check out Jay Boumeester's reaction to the McCabe signing. Am I reading it wrong, or does he seem quite indifferent to the whole thing? Like his opinion of the Toronto media! Blunt.

**UPDATE** McCabe told Nick Kypreos after the trade that he was only asked to waive his no trade clause once last season. 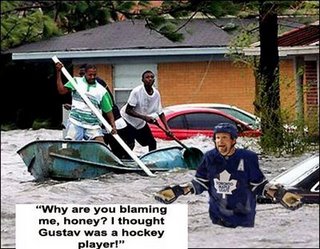 In an interview with floridapanthers.com McCabe said:

"Jacques was the ‘D’ coach (at the Olympics) so I got to spend some time with him," McCabe said. "Jacques went out of his way to bring me here and I’m happy to be wanted. Jacques has done a great job (in Florida). He’s got good young talent. And, obviously, the acquisitions this summer have been great.
Bringing in Cory Stillman, a guy with two Stanley Cups…guys like that are few and far between. And the acquisitions of (Keith) Ballard and (Nick) Boynton is a big upside. With myself added, and Jay Bouwmeester, who is one of the best defensemen in the league, hands down, I think we have one of the best defensive units out there. Plus you have an All-Star goalie."

Kind of sounds like the Canucks. The Panthers are going to need young guys like Booth and Horton to step it up on offence, but they do have a pretty good defence and goalie. Losing Jokinen and adding Stillman isn't exactly an upgrade or reason for the fans to get excited.
Time will tell if McCabe can become a consistently reliable guy on the back end. It's doubtful. We know he can put up the points though.