Maybe it's time for a Kesler "promotion"

Share All sharing options for: Maybe it's time for a Kesler "promotion" 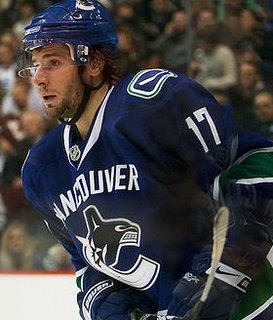 Ryan Kesler found a home on the Canucks' checking line last season, and really clicked with Alex Burrows. But when asked in an interview if he'd be open to some power play time Kesler said all of the right things. Of course he'd welcome that. But he wants to do what's right for the team. If Alain Vigneault wants to use him as a 3rd line checking center and for the PK mostly, then he'll accept that. He likes that role.
With a long term injury to Brendan Morrison last year, Kesler filled the gap in quite nicely. He scored 21 goals, 4 of them on the PP and 2 on the PK, and averaged a whopping 19:03 of icetime. That was almost 3 extra playing time minutes per game on average compared to the previous year.
Maybe, just maybe, our top 6 scoring center is sitting right under our noses. What if Kesler was given a bigger scoring role with some (or a lot) of the "checking" reins taken off of him? Hell, he scored 21 as a checker. Imagine what he'd do as a go-to scoring guy. I've always thought he could score 35 consistently. So does Bobby Clarke, apparently, who threw an offer at Kesler last summer (to replace the loss of Keith Primeau) that almost everyone thought was "inflated". Well Kesler proved us wrong.
A Kesler promotion would raise several questions, however.
Assuming Gillis doesn't land Sundin or another top 6 forward through free agency or trade:
1- wouldn't Kyle Wellwood be considered our 2nd line center? Probably. Wellwood wants to be a top 6 guy, but is going to have to earn it. If he isn't granted a top 6 spot due to lack of production or work ethic, then Kesler would fit the bill.
2- If Kesler gets the promotion, what would happen to the production of Burrows? It was a treat watching Kesler and Burrows click last season especially. Would Vigneault be willing to part with that formidable tandem? Tough call.
3- Wellwood is not a checker, last time I checked. So if Wellwood doesn't crack the top 6 where does he go to...the Moose? There is no replacement for the PK minutes that the Nucks would lose (at the center position) if Kesler moves into a bigger scoring role. Or is there? Newly-acquired Ryan Johnson just may be that guy. He averaged over 14 minutes per game last season and was playing in the 19 minutes range for the Blues towards the end of last season. He just didn't score as much as Kesler did, nor will he ever, it seems. I think that an 8-goal 23 point season is the most you can get out of him judging by his career stats. In other words...Burrows the 2nd. Luongo had said great things about Johnson, so we'll see how much of a role he plays.

If Gillis acquires another top 6 center before the season starts, then there is no doubt that Kesler stays on the 3rd line. Odds are he will be there regardless. I'm just thinking that Kesler fits the bill as a top 6. It's his time. He alluded to the fact that he's getting to be that age now where he can play a bigger role. He will. He'll have a bigger leadership role and I think he should be given a bigger offensive role as well. Just my opinion.

-Kesler idolized Mike Modano growing up. They are both from the same town (Livonia Michigan)
-Kesler is a hardcore video gamer. He played a lot of Mike Tyson's Punchout and Donkey Kong on the original Nintendo system when he was 6 years old and up. Yup, me too.