Markus Naslund talks about his Vancouver Past

Share All sharing options for: Markus Naslund talks about his Vancouver Past 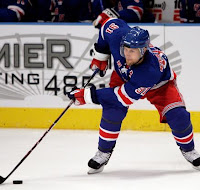 From Mr. Gallagher at The Province. Naslund talked to Gallagher about his time as captain of the Canucks, the Bertuzzi incident and the Rangers.

"Everyone coming to you after the game was part of being captain of a Canadian team, and I didn't mind it that much, but I don't miss it now," said Naslund with an understated laugh. "There were times it wasn't fun and it was tough, of course, because I didn't have the answers. But that was part of the job and I accepted it and it didn't really bother me.

"Maybe I didn't have as much fun playing last year as I used to, and that was always the reason I played and the reason I play now. There were a number of reasons for that. I wasn't playing as well as I should have been and had in the past and that bothered me, and the style we played wasn't something I enjoyed particularly.

"Here, it tends to be a little more open, where you have centres who are looking for you, and everyone is looking to get the other guy the puck. I've always enjoyed ... getting scoring opportunities and that seems to be happening more here playing with Scott or Chris.

"I've been getting scoring chances but I seem to be a little rusty and I'm just not putting them away yet. I never really knew what kind of team they had here but we've got great goaltending, a pretty solid D and three good offensive centres. There are lots of NHL-calibre forwards who aren't going to make the team. There's a lot of depth here. It should be fun."

I am not even going to comment on that because any of you that know me know what I think about Naslund as a player and a captain. No use kicking a dead horse.
Bottom line: I hope the Rangers finish in at least 9th spot this season.
Follow the above link to read the rest of Gallagher's article. Keep a barf bag nearby, or if you are a Nazzy-lover: a box of tissues. How's that for being objective? Cue sarcasm.