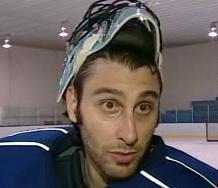 Luongo was interviewed by phone from Montreal recently, and as The Province's Jason Botchford points out, it may lead to Louie signing an extension down the road.

"The great thing is we're on the same page and we both want to win," Luongo said of Gillis. "We're here to win and we want to build a winning team that can contend for the Cup every year.
When I spoke to him, it was very reassuring for me because that's why I'm playing in Vancouver -- to have a chance to win it all. When you hear something like that from your GM -- that he's as committed to winning as Mike is -- it gives you a comfort zone that the organization is all about putting the best team on the ice."

So I can hear the nay-sayers already: "Well what about this year? How is this year's team any better than last year's team?" Well, I hear that all the time from Canucks fans either online or in person. I don't agree. I think this year's team, with all the question marks surrounding Wellwood and Bernier considered, are better than last year's team. I don't even give Morrison and Naslund much passing thought anymore.
Back to Luongo. And speaking of new players, Luongo again mentioned that he likes the acquisitions of Hordichuk and Johnson, former teammates of his in Florida.

"Those are additions which were made under the radar but I think they're huge for this team," Luongo said. "They are guys who are physical and can take the pace of a physical game.
"A guy like Ryan is invaluable in terms of blocking shots, working on the penalty kill and winning key faceoffs. Those are little things that people maybe don't notice but make a big difference over the course of a season."

Damn rights. A shot-blocker is a guy that sets an example out there. That character is welcomed by me.
Perhaps the second-biggest importance of Botchford's article is the part where he mentions that Gina Luongo and their daughter Gabriella will be moving to Vancouver for the season. An earlier interview and article about Luongo made it sound like she'd only be here for training camp, or it was up for debate. If the Luongo family is together here, then we shall have a focussed Luongod all year long.
Check out the the Province article for more of the interview with Luongo, including his thoughts on his own performance last season, his new pads and more.