Share All sharing options for: KHL shouldn't solely be blackballed 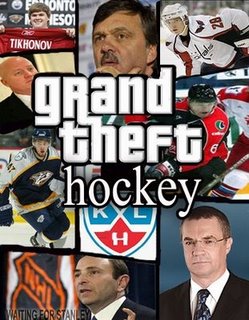 Thank you Ken Campbell of The Hockey News for saying this:

When Alexander Semin returned to the NHL in 2006-07, he should have been forced to comply with the final year of his entry-level contract because he never fulfilled it and was suspended by the team for the two seasons he was in Russia. But somehow, that final season was ignored and the Capitals, knowing Semin wouldn’t have returned for entry-level money, managed to sign him to a new two-year deal despite the fact he had not fulfilled the terms of his first contract.

When you see things like that happening, can you blame Radulov – who was contractually in exactly the same boat as Semin – for bolting back home at the first opportunity? If the NHL isn’t going to respect its own contracts, how can it expect anyone else to do the same?

And this is the kind of attitude both the leaders of the NHL and IIHF find themselves up against these days. NHL owners talk a good game, but are happy to circumvent their own rules and try to do business on their own terms if it means they can get a star player. The KHL, meanwhile, seems to want to play by its own set of rules and has little regard for the IIHF. Other European federations see what’s happening and are starting to stand up for their own interests, as well.

This war has 2 sides. We have been stealing Russian players who were under contract with Russian teams for a while now. Our bullying tactics have finally caught up to us because the KHL is gaining power and putting the issue into the spotlight.
It's amazing how the KHL changed their tone last week regarding those several players who were signed by NHL teams that could have been under contract in Russia. That looks like a positive humble step in the right direction, perhaps. Now will the all so powerful NHL return the favor?
Tip of the hat to Paul Kukla for finding the story, of course.