Share All sharing options for: Justin Williams out 4-6 months 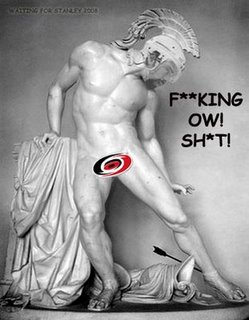 Torn achilles tendon. Jeez. Williams only played in 37 games last season because of back problems and a torn ACL as well. He had 30 points in those games. He has the potential to be a 70-80 point producer.

The good news about this is:

-if you are creating a hockey pool and enter J Williams as one of the choices, people won't confuse it between Justin and Jason Williams.

-maybe the Hurricanes should pick up Glen Murray, who's still in limbo. Hey, if they can turn Sergei Samsonov's career around, surely they beat some more points out of Murray. Perhaps Mark Parrish is another option.

-The Acid Queen hasn't caught on to this yet.

The bad news is:

- I really don't mind the Hurricanes and am pulling for them to turn it around this season. But losing Williams is a lousy step backwards.