If JP Barry has his way, the Sedins are in for a huge raise **UPDATED**

Share All sharing options for: If JP Barry has his way, the Sedins are in for a huge raise **UPDATED** 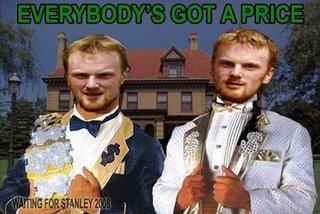 "We just finished an extension negotiation for Shawn Horcoff, who did almost a carbon copy deal of the Sedins last time, and since that was done two years ago, Daniel and Henrik have outpaced him quite a bit offensively," Barry told the Team 1040. "So, we're going to see deals like that in the marketplace – the Gomez, Drury deal - for players who go free. They've outpaced both Gomez and Drury over the last three years. You know, they've outscored those players, and those players went free, so I think the question is 'What's the price to stay, and what's the price to go?'"

Shawn Horcoff's extension will see him get paid $7 million in 2009-10 and $6.5 million in 2010-11 and it slowly descends drom there. Scott Gomez makes $8 million per season over the next 3 seasons and Chris Drury makes $7.1 million this season and $8.05 million next season. So you get what kind of money Barry and the Sedins are going for here: somewhere between $7-8 million for each sister.
Barry had also mentioned that the deal would probably have been done already had Dave Nonis still been the GM, as he had been in management with the Sedins since they were 18. Well isn't that special?
If Gillis doesn't acquire anyone else in the near future, he can barely absorb the Sedins' potential raise. But it will be close. But you have to keep in mind that Lukas Krajicek, Alex Edler, Mattias Ohlund, and probably even Steve Bernier will all become free agents next summer and will be wanting a raise. The near future doesn't look so damned rosey does it?
If the Sedins don't get the $8 million here, they'll get it somewhere else. Then the questions become: does Gillis want to build the team around them? If yes, then who does he trade away to save salary? Bieksa or Ohlund?
If he chooses NOT to extend the Sedins and a deal falls through, would it not be wise to flog the twins and get some value in return? If they leave next summer and we save all that money, what is it going to matter? Vancouver cannot attract big name players anyways.
Well, this will get interesting. Look for the Swedish twins to really step it up this year to boost their market value.

"We're not looking for the last amount of dollar. It's about our family being happy and us being happy -- that's the most important thing. But we haven't talked about anything, so we'll see what happens."

If the Twins aren't looking for the last amount of dollar, JP Barry IS. If the Sedins took any kind of discount I would be impressed. I just have a hard time believing any player who says that it's not about the money. Heard that one many times before.
The Swedes, along with Barry, are going to meet with Mike Gillis tomorrow to see what Gillis thinks about having them in the Canucks' plans going forward.
NOTE: Back in April, Gillis said of the Twins:

"I don't think the group of forwards right now are ready to compete. I don't know if they [the Sedins] are players the team will be built around moving forward. That evaluation process will go on."

A statement he later retracted. The Sedins were taken aback by that statement but stated that they have been used to that kind of criticism since Day 1.