Gillis traded Shannon out of mercy

Share All sharing options for: Gillis traded Shannon out of mercy 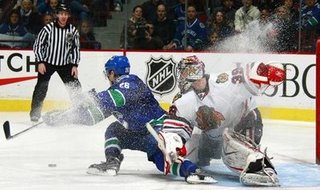 "I just saw him as a player who has to play in the top six in this league to be effective," Gillis said. "We made some moves with [Steve] Bernier and [Kyle] Wellwood, and are in the hunt for another top-line, top-six player.
It would be very difficult and very challenging for Ryan in that environment."

Shannon is a top 6 player, even if he is under-sized. "Under-sized" shouldn't be a word in today's NHL by the way. But the speedy guy hasn't had enough of a chance to build up his value yet, and wouldn't get that chance in Vancouver.
But maybe MG could have got more than just Nycholat in return, but not according to him:

"We had him rated as one of the top three or four defencemen in the AHL, pushing for the No. 1 spot," Gillis said. "We're looking at him as a guy who can play games for us.
"Right now, as it sits, we need depth, particularly with our travel schedule. He will come in here and compete for our seventh defenceman's job. We thought he would be the perfect depth guy for us for a variety of reasons."

Gillis is not ruling out a trade for a top 6 center yet either. For more on that, check out the Province article.