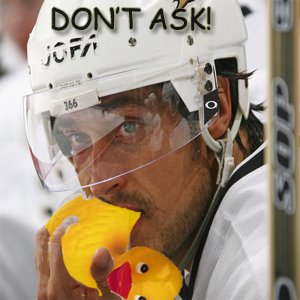 "We're happy to have Teemu back and thank him for his patience as we sorted out our salary cap situation," Ducks executive vice-president/general manager Brian Burke said in a release. "Teemu is a true Duck. His loyalty to this franchise and community is unquestioned."

It will be a huge boost for the Ducks to have both Scott Niedermayer and Selanne for a full season rather than the bullsh*t they pulled last season. Does this mean Chris Kunitz's stats are going to elevate?
Selanne is rumored to play tonight against the Canucks.