Demitra saying he hopes for a more offensive system is wrong

Share All sharing options for: Demitra saying he hopes for a more offensive system is wrong 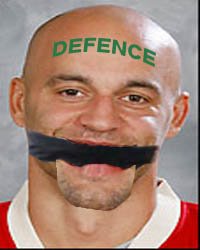 From the Province today:

"Obviously I was working with Mike Gillis for many years and I know what he's like," Demitra said. "I'm hoping they're going to try and change it here and play a little more offence."

Demitra and pundits alike blame a bit of Demitra's futility on offence last season in "Jacques Lemaire's suffocating Minnesota Wild system." While that may be a fair assessment...SO WHAT? I grow weary of fans and now a player saying that they hate playing boring defensive hockey. Like I have said countless times before: run and gun offence teams don't win cups all that often. What do you think Alain Vigneault is thinking when he hears or reads about Demitra wish? I would hear "my coaching style is not good enough." It also reeks of a dichotomy between Demitra-Gillis and Alain Vigneault.
I don't know what Gillis has said to AV about coaching styles this year. But I do know that 2 seasons ago Vigneault was a Jack Adams Trophy winner as coach of the year. So, now that the Canucks miss the playoffs the following season they should scrap his system?
Frankly, I don't care if fans are bored by his style. They just completely miss the point. Success is to be achieved at all costs, boring or not.
Does anyone know how good of a backchecker Demitra is? I don't. But he had better be, because Vigneault won't settle for less, nor should he. It's Viggy's ass who is on the line here.
Demitra's comment is selfish, mostly. I like hearing guys like Ryan Kesler, who when asked if he'd like some powerplay time he said: "Whatever is best for the team." Then he mentioned that it would be something he would like to do.
So Pavol, if you want more chances offensively, you sure as hell had better get back and help the D out.
Am I over-reacting or reading too much into Demitra's statement?
How about he plays the way he's told to play by his coach. And if he starts whining about being "held back", then I am not going to enjoy having the guy playing here. Then he can follow Naslund's sorry carcass to the east coast.
Harsh? Yes. But I'm being honest here. We don't need any distractions this season. We need wins, and a team where everyone is on the same page.