Share All sharing options for: Canucks name Roberto Luongo their captain....say what? 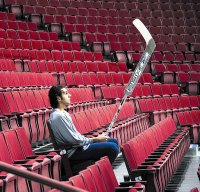 The Vancouver Canucks have a new captain and his name is.. Roberto Luongo.

Luongo, who is in the third year of a four-year deal with the Canucks, was named to the post on Tuesday along with alternates captains Willie Mitchell, Mattias Ohlund, Ryan Kesler.

By league rule, the Canucks goaltender cannot wear the 'C', but he can be named captain. Mitchell will be designated as the person who will deal with officials on a nightly basis.

And a nice little piece of history:

Only six goaltenders have served as team captains in NHL history. The Montreal Canadiens' Bill Durnan was the last goaltender to serve as captain in the 1947-'48 season.

Prior to 1948-'49, the NHL passed a rule prohibiting goalies to act as captain or assistants in what could be called the 'Durnan Rule.'

The Canadiens keeper left his crease so much to argue calls that opponents protested saying that Durnan's actions gave the Canadiens unscheduled timeouts during strategic points in games.

Right, because you know Luongo would love to skate out of his crease and yammer at the refs. He already dives to buy time. It's true.
But is naming Luongo captain really necessary? It just seems unnecessary. Willie Mitchell would have been just fine wearing the "C". So what the heck was management thinking?
Well, Canucks.com has a video up with interviews from Gillis and Vigneault.According to them, Luongo had every leadership characteristic that Gillis and Vigneault had studied about. Plus, Luongo did want it.
Strange concept, but Vancouver management knows best here. And after thinking about it for a while, I actually agree with the choice. Who is more passionate about winning than Luongo?