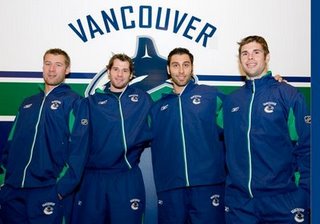 What a great shot of the newest captain of the Canucks and the alternates.
Was Luongo the right choice? For the most part, yes. It's added burden for him though, but I think he is ready for that. Who wears his heart on his sleeve? Who answers to the media? Who challenges his team outright in front of the press when the team stinks? Luongo.
Crazy how this hasn't been done for so many years (60-plus). But like the TSN panel stated: There are other examples of goalies being leaders of teams right now: Brodeur (which Mitchell alluded to), Osgood and Turco. And no doubt Patrick Roy was a big leader for the Avs in his day. The Canucks are the first ones to technically call their goalie their captain. So this isn't completely unusual.

Try read the faces of the players in the above picture:

Kesler: "Look at my buddy Louie. He's my hero."

Luongo: "Not only am I god. I am now a captain. Captain Luongod to you, fools."

TSN asked it's readers if Luongo was the right choice and so far 66% agree.