Those that believe in Mark shall not Parrish, but have eternal strife

Share All sharing options for: Those that believe in Mark shall not Parrish, but have eternal strife 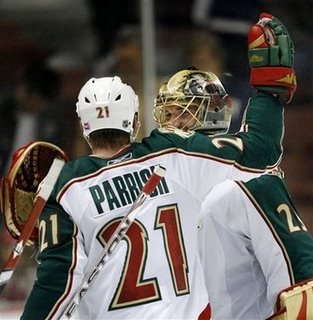 Although the numbers don't match, both on the ice or in the bank, Mark Parrish is on the minds of the Vancouver Canucks as "Plan B" if Mats Sundin decides against the Canucks' $20 million, two-year offer.
Parrish's agent (John Vollan) spoke to Vancouver radio station CKNW on Wednesday confirming the Canucks' interest in his client and admitting a signing may not take place until Sundin makes a decision on his future.
"Mark is interested in Vancouver,'' Vollan told CKNW. ''He's just sitting back and weighing his options. He's just looking for an opportunity and a spot to help a team.''


TSN mentions that the Islanders and Predators have also inquired about him.
So what are your thoughts of Parrish possibly in a Canucks uniform?
I'm torn. (shut up Natalie Imbruglia, now that damned song is in my head!)
The best word that describes Parrish is STEAKY. Scores in bunches and then disappears. This has more or less been true throughout his career. The 31 year-old winger has played 9 years in the NHL and has appeared in 660 regular season games, scoring 208 goals and 372 points. In 27 playoff games he only has scored 5 goals and 9 points. Streaky. Parrish is not a sure shot.
His best season came in the 2001-02 season with the Islanders, where he scored 30 goals and 30 assists in 78 games.
Even with the defensive-minded Wild the past 2 seasons, Parrish averaged about 17 goals and 34 points in an averaged 71-game span. Last season he scored 16 goals in 66 games.
In July 2006, the Wild signed Parrish to a 5-year contract worth about $2.65 per season. He was waived by the Wild on July 31, 2008 due to salary cap reasons, according to Wild GM Doug Risebrough. You'll see below that it was more than just that.
Parrish is slightly injury prone, but still managed to play over 70 games per season throughout his career.
-He sustained a concussion in Game 1 against Colorado during last season's playoffs after sliding head- first into the boards.
-He was benched by Wild coach Jacques Lemaire several times last season. Remember, he's inconsistent...Parrish had only 1 goal in his previous 21 games at the time. Work ethic was questioned.

"To me, it's shape. That's it," Lemaire had said. "Push in practice, you're going to push in games. It starts to transpire on different guys, that same sickness, and it is a sickness. Certain guys don't push as hard in games because they don't push in practice."

Concerned yet? I am.
-Check out this article in the Star Tribune from the same slump.

For much of Mark Parrish's career, he's been a half-skilled, half-gritty warrior who could be penciled in every season for 20-plus goals.

"At this point in my career, I'm worried most about winning, and that's what I'm frustrated most about. I don't feel like I'm helping my team win," said Parrish, who had his first child, Gianna Marie, two weeks ago. "I just told my wife [Nicholle], 'Other than Feb. 19, it just feels like I can't get going.' Other than that fantastic day, it feels like I'm stuck in a rut, like I'm stuck in quicksand and can't quite get out."

Ugggh. Gillis, take a rain check. No, just skip it!

Am I being cruel? Do we want this guy struggling with us? Parrish has played for 4 teams in his 9 year career. Should Vancouver be the next team that tries to mold him into a consistent player? I say forget it, even if Sundin doesn't sign here.

The good about Parrish? When he is on his game he is a force. A presence in front of the net. A sniper.

-Parrish takes a high stick in the mouth, loses a tooth, doesn't go down, and picks the tooth up after play stops.