Share All sharing options for: Theo Fleury takes on baseball 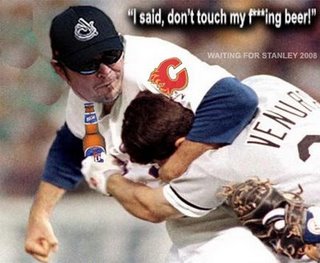 OK, so I'm mean. It's just a joke. Hey, I like drinking too.
So Fleury returns to Calgary to play baseball with the Vipers. The feisty former NHL'er just turned 40 this summer. His NHL career was cut short by alcohol and drug problems. He was forced to leave the NHL went to Ireland to play for the Belfast Giants.
Personally, I hope Theo's feeling well. I used to hate the gritty bastard, but now I only have respect. He had 1088 points in 1084 NHL regular season games. In 77 career NHL playoff games he scored 79 points. The guy wore his heart on his sleeve and was more of an asset than a liability most of his career, even though he could out-dive Crosby.... At least Fleury played with balls.