Share All sharing options for: Sundin's agent won't rule out a decision from Mats coming during the season 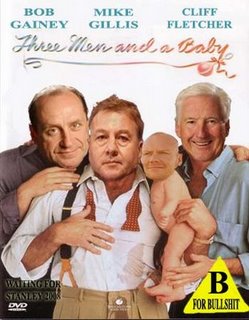 From Brad Ziemer of the Vancouver Sun:

The agent for free-agent centre Mats Sundin says his client may not make a decision about whether to continue his National Hockey League career until after the start of the regular season.

J.P. Barry said Wednesday that a decision by Sundin is not imminent and suggested there is no guarantee that Sundin will meet his self-imposed, end-of-August deadline to decide whether he will play this season. (edit: fucker!)

"We are going to talk to him later this week just to get an update from him, but right now we are not putting any pressure on him because he has to get that feeling that he wants to play," Barry said. "But right now, he's no closer."

Barry did not rule out the 37-year-old Sundin following a path set two seasons ago by Anaheim defenceman Scott Niedermayer, who waited until December to rejoin the Anaheim Ducks.

"It's possible," Barry said. "It's not something that's preferable even to him. Mats has said in the past it's not something he is totally comfortable with, but at the same time you can't say that until you're in that position yourself. Niedermayer went through this and needed time and perhaps Mats is in the same situation."

Expat, you have an inside scoop? GZ Expat, with a site of the same name had alluded to or even predicted this over a month ago in the WFS comments section. I didn't believe him.
If Sundin does hold out until sometime during the season, it changes the face of the game. Right now, it's fair to say that the Rangers, Avalanche and Flyers are out of the picture due to salary cap restrictions (and a hell of a lot of player movement to be done in order to make room for Sundin). But if Sundin holds off until, say, December, well that would cost an interested team a hell of a lot less to acquire his services, increasing the pool of teams again.
Yes, that would be the Scott Niedermayer or Selanne route. And I didn't like Niedermayer or Teemu doing it. Now, for the first time, I find myself getting angered by my favorite player since Doug Gilmour retired. There's no respect coming from me if he holds off for another several months.
I also think it's fair to say that he's not coming to Vancouver. Yes, I am about 90% sold on that theory if JP Barry has his facts straight.
Don't you find it ironic that Barry goes to the press with this on the same day that Sakic announces he will play? At the same time, GM's were putting a lot of heat on Barry to get some damned answers recently.
Either way, fuck it.
Mike Gillis is still being a nice guy after hearing this news. He must have been a player agent in the past. (Cue the sarcasm)

"It's difficult to react to speculation and I'm not going to," he said. "I think that our position has been pretty clear. We made a significant offer and we are prepared to be patient. Nothing much has happened in the hockey world over the past 30 days and on a moving-forward basis we are going to try and remain as patient as we can."

"I didn't anticipate it taking this long, but this isn't a simple situation, it's more complicated than most and we have to accept that."

Oh yeah, that player agent blood still flows through his veins a little, doesn't it?
I was thinking Gillis would go the trade route as a plan B, but if you read what he says to the Vancouver Sun, it seems as though he is planning on giving some young guys a chance.

"I am confident that some of younger players that we have spent a lot of time with this off-season are going to really push to be on this team," he said. "We have added players, but I think there are going to be a couple of players who are going to step up here and show us they are prepared to play in the National Hockey League."