Share All sharing options for: Sundin to start skating this coming week 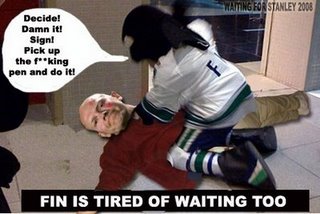 From the same Toronto Star article as the McCabe story, Cliff Fletcher states:

"He's working out off the ice and he's supposed to start on the ice the beginning of the week.(in Sweden)"

Does Fletcher know something that we don't? It could be Toronto or nothing for Sundin it seems. Even Wellwood alluded to that in his interview with Canucks.com: that Mats has played for the Leafs for so long that he doesn't know that he wants to put on a different uniform.
The question is: What kind of offer is Fletcher possibly pitching to Sundin? If the Leafs are rebuilding, then how can Fletcher even present a deal to Mats that would involve a no-trade clause, except out of respect? It would be in Fletcher's best interest to sign Sundin now and then trade him to a contender in February for an obsene amount of draft picks, right?
Well we know how Sundin liked that type of notion judging by last spring's deadline events.... he didn't like it. But even through all that, I think Sundin understood it was a business, as he stated in that interview from the above link.
Maybe Fletcher can absorb Sundin's possible contract if McCabe pisses off and Fletch will let Mats retire as a Leaf in 1-2 years during a rebuilding phase. Mats could guide the influx of young talent coming into the Leafs' roster. His passion for a Cup would come into question, but I'm getting the feeling that Mats wouldn't care.
We'll see.
To be honest, it wouldn't kill me to see him finish his career there. But if he chooses not to...it's Vancouver or retire, in my opinion! I don't want to see him wearing any other jersey!