Sundin interview at a golf tournament in Sweden yesterday

Share All sharing options for: Sundin interview at a golf tournament in Sweden yesterday 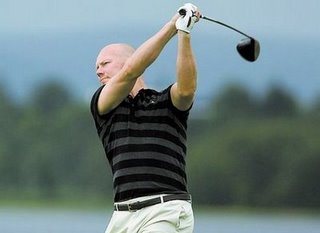 Sportbladet caught up with Mats Sundin at Peter Forsberg's Pensum Invitational golf tournament. (Original article here)
Roughly translated to English through a Google translator:
-Sundin was attracting the most attention, as he is the most sought-after player right now.
-"It is not at all difficult (decision). I have had a fantastic summer and took it easy. It is good to rest physically and mentally from ishockeyn to be able to come up with a good decision," says Sundin.

-When asked if his decision could be stretched out sometime into the NHL season Sundin replied: "I do not think so. I want to come to a decision before the season starts. It feels so anyway."

-The reporter mentioned to Sundin that he had talked to Saku Koivu recently and Saku really wants to play with Mats. Sundin replied: "It is very flattering. The interest has been incredible, from all over the NHL. The fact that so many clubs and players, both Swedish and foreign, have heard of itself is great fun. Since it is only one person who can take the decision whether I should continue and it is a self -.......
yeah that's how the translation ends. So basically, it's his decision alone, obviously.
Still no further ahead on the decision process though.