Share All sharing options for: Steve Bernier skating early by his standards 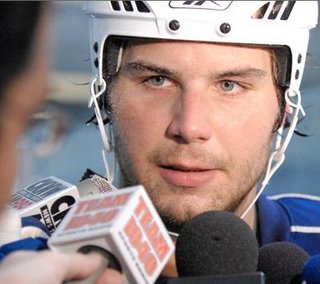 It's a great sign to see Bernier practicing with some of his new teammates already. Especially considering that his weight and conditioning has come into question in the past. Bernier seems poised to prove something this year. From Sportsnet:

"This is the first time, actually, that I have come this early," the 23-year-old Bernier said after his Friday morning skate. "I am very, very excited to be in Vancouver. I want to make sure to be as ready as I have ever been before to make sure I have a good start to the season. That's why I came so early and also it's always nice to meet the guys you are going to play with and also meet the fans and get to know the city a little bit better. So far, so good. I love being here and I am happy to be here."

Sounds good doesn't it? I'm excited about what Bernier can bring. Already speculated as a good fit for the Sedins, Bernier could score over 30 goals this season.

"What I am going to do is create space for them, go get the puck in the corner, give it to them, be in front of the net, screen the goalie, take rebounds, that is going to be my job," Bernier said. "Even if I play with two other guys, that's my job anyway. My game is not going to change."

Reminds me of Anson Carter, or what Taylor Pyatt was supposed to succeed at.