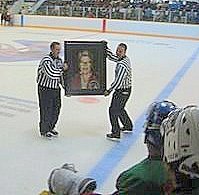 So I attended the anniversary game tonight and it was a great time. The Smithers Civic Center will have it's name changed to something along the lines of the Mary Watson Center in honor of the hockey-mad mother of the 2-time Stanley Cup-winning brothers Jim and Joe Watson from the 1974 and 1975 Flyers.
Dan Hamhuis was there, as were Rob Flockhart, Ron Flockhart, Stewart Malgunas, former Avalanche/Ducks system goalie Mike Wall, and local hockey greats of the past, present and future.
For an exhibition game, it was fairly competitive. I believe the score ended up being 6-3 for Team Hamhuis over Team Watson.
There were two 20 minute periods played. In between periods, Mary Watson was honored for her dedication and love for the game, and of course for raising 2 Stanley Cup champion sons. An amazing portrait of her was presented, which will hang probably next to the paintings of Jim and Joe.
Hair-pulling Mary, as Craig Carchidi dubbed her at Philly.com a couple of days ago, was then pushed around the ice in her wheelchair. She is 85 years-old. A great moment for sure.
You could see the poise and speed of Hamhuis out there. But there are a couple of other young kids that can really play the game with speed as well.
-Hamhuis is a local celebrity of course. Pictures were taken with himself and the Smithers pee wee team before the game.
-After the game the kids were lining up to get autographs from Dan the Man. Myself, I have hung out with Dan once in the past. 3 of us canoed down a river for miles right before he went to the Predators training camp for the very first time. A crazy adventure that was.
-But I really wanted to meet Joe Watson. A legend. Still loved in Philly. Even though I was born at the time the Flyers won their first Cup in 1974, I have both the 1974 and 1975 final games on tape.
So after the game, with all the kids flocking around Hamhuis, I saw Watson standing on the ice with our local sports photographer. I said to my wife: "Take the camera and let's head onto the ice to meet Joe Watson." So we did. And Joe was the nicest guy you could meet. I asked him if he had read about the Philly.com article about the game and what they said about his mother. He said "Yes I did. That story went right across the country!"
So then I told him about my video collection of Cup Finals games from 1974-present. He asked me if I was a Flyers fan and I said "no!" And then he was pulled away. I got my picture with him as seen below, and walked away feeling happy. Never met him before. As I walked away Joe yelled "Nice to meet you." Classy.
-Joe coached Team Watson tonight. You could see the way he watched the game that he still loves the sport.
-He also loves the Flyers. But why wouldn't he? He was wearing one of his Cup rings tonight! I know that old-school Flyer fans still love him back.
-What else about this was great? Watching a chockey game live in the middle of summer!
So I said I would take pictures and I did. I'll post them below. 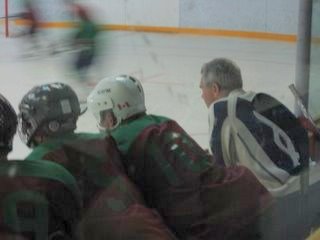 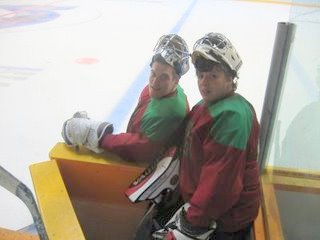 My cousin Cache Harris (on bench) co-runs goalie camps in the summer along with Mike Wall (on ice). They have both been in and ran camps with Canucks' goalie coach Ian Clark. You can tell Clark has trained them from the way they play the butterfly position. Clark has Luongo doing that style now too. 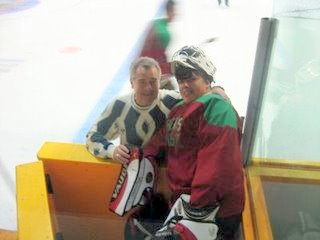 This shot of Cache and Joe was taken just before Cache played the second half. 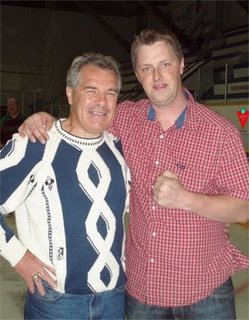 Why am I showing the clenched fist? Maybe I wanted to punch Joe for being a Flyer once. OK, actually it's because Joe's a tough guy and that was the first thing that came to my mind.