Share All sharing options for: Smithers Civic Arena celebrates 50th anniversary and will be renamed after the Watson's mother 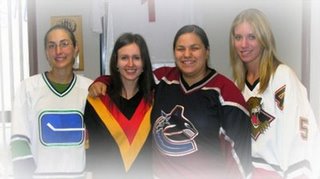 I really wanted to get into a goalie equipment or Gary Bettman rant today, but I'll skip those for now, as this local story is too cool to pass up.
My hometown Smithers' Civic Arena is celebrating it's 50th anniversary this coming Friday by holding a Commemorative Hockey Game that will include local pro and semi-pro players from the past present and future.
Anyone entering a draw will have a chance to win a signed Dan Hamhuis or Michael Wall jersey. Those 2 are from Smithers and surrounding area and will play on Friday night.
The Bulkley Valley Credit Union, where my wife works, is selling the tickets, and the employees (mostly ladies) are wearing Canucks/hockey jerseys/shirts. Speaking of wife, that would be my wife second from the left wearing the early 80's Canucks jersey. That picture is proof that girls don't need to wear those gad-awful pink jerseys to look feminine.
As you may or may not know, the 2-time Cup Champion Watson Brothers from the Broad Street Bullies grew up playing hockey in the Smithers arena. I was too young to see that, as I was born the first year the Flyers won the Cup (15 days prior to their Cup win.)
Apparently, the arena also was home of a Bruins' farm team in the 70's, so I am told.
My biggest memory of that place was watching the NHL Oldtimers coming to town to play there when I was just a little punk in the 80's. My dad took me to the game, and that is one of my favorite times with him or anyone. I can still remember Eddie Shack clowning around the whole damned time making us laugh. Good times.

The really big news surrounding this anniversary on Friday night is that the Arena will acquire a new name. No, not after Hamhuis or the Watson Brothers... but after the Watson's "hair-pulling" mother Mary, as Philly.com puts it. Hair pulling? Why is that?

"They had boards and no glass on the sides, and the fans could reach over and make contact with the players," Watson said. "One time, I was playing left wing and a guy came over and hit me pretty good, and my mother reached over and grabbed his hair and said, 'No one touches my boy!'"

Nice. God, I love old-time hockey.
Mary the Skull Collector (ha) has been a fixture at the arena for decades.

"A lot of [NHL] players have come from that area, and they just decided they would name the arena after a mother who has always been there," Joe Watson said yesterday from his home in Media, Delaware County. "She's been going there for 80 years; she always made sure her kids got there. They even have a special seat for her in the building."

Should be a great time. I'll try take some pictures when I'm there.

For even more on Mary Watson, check out this Interior News article about her talking about raising the Watson Brothers. Hat tip to Bill Meltzer for finding it.