Share All sharing options for: Sean Avery says Markus Naslund will not live up to fans' expectations 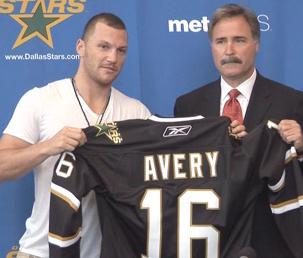 In his introductory press conference Avery included Wade Redden in that statement yesterday, according to the Swedish paper Expressen.se. That is not in this footage of the event.
Avery is going to have to meet expectations as well, as he will earn $15.5 million over 4 years with the Stars.
-Avery also said that he has a better chance of winning with Dallas.
-He said he watched the Dallas-Detroit series a few months ago and says that if he was in that series that he would have made a difference.

Avery also guested on the SportsRadio 1310 The Ticket in Dallas recently. Here are some of his best quips:

-When asked if he thought he was the mosted hated man in hockey, Avery said "yes, 100%" When asked why, he said: "I do nasty things with my stick and try and hurt guys and say nasty things to other players about their personal lives."

-About Avery being an irritant: "I'm like athlete's foot or uh...crabs. Nice one.

-The topic of Avery's internship with Vogue came up. The one guy asks Avery how the 3 interviewers in the room were dressed. Avery responded: "This is the worst-dressed radio station I have aver seen in my life. You guys look disgusting and I don't even know if you shower...you definitely are not married."
About the internship: "It worked out well. You're in a world full of women and gay guys, so your odds are really good as far as that (scoring) goes."

When asked if he dated any of the Vogue models this summer: "I dated every single one."

Avery also talked about having Brett Hull as a landlord once, injuries he's played through (torn spleen), and the issue of hitting guys to hurt them. Worth a listen.

I think Avery was a great addition by Dallas. He will get a chance to play in the Top 6 (obviously). Dallas is going to be even more of a pain in the ass to play against. Avery, Ott, Morrow....lots of toughness to complement the talent.