Remembering the Gretzky trade in 1988

Share All sharing options for: Remembering the Gretzky trade in 1988 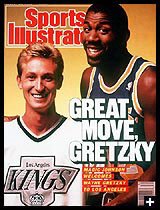 Shock, disbelief, tears and angry that my hero was leaving the Oilers to join an American team. Even as a 14-year old, I thought Gretzky belonged in Canada. Gretzky WAS Canada. All of my Gretzky hockey cards, stickers, photos, books and even my Wayne lunchkit from elementary school seemed worthless. I was angry.
But not nearly as angry as the Oilers fans I'm sure, who mostly blamed then-owner Peter Pocklington for the trade and even Gretzky's wife Janet, who I believe was living in California at the time. Hell, they were only married 24 days earlier and were expecting a child.
The original news audio and some Oilers fan reactions from that dreadful day can be found here at CBC's archives. Just listening to it gave me flashbacks.

There was something Gretzky said in that interview that was absolutely true, even though fans may not have thought so at the time: "The Oilers are a good team with or without Wayne Gretzky."
Mike Krushelniski and Marty McSorley went to the Kings with The Great One in exhange for Jimmy Carson, Martin Gelinas, first round picks in 1989, 1991 and 1993, plus $20 million in cash. The cash seemed to be the kicker didn't it?
The 3 first round picks turned out to be Jason Miller, Martin Rucinsky and Nick Stajduhar. None of those players benefited the Oilers much. Wasters. In fact, the Oilers were pretty lousy at drafting after the Gretzky trade up to 1993. No wonder why they took a nose dive after 1990.
Speaking of 1990, this year in Oilers' history is what now stands out in my mind the most in regards to the Gretzky deal. The year that the Oilers won the Cup without Gretzky. It didn't take long for them to have success after Wayne did it?
Here is the Oilers playoff roster that made won the Cup in 1990:

Kevin Lowe- with the Oilers since 1979.
Steve Smith- No one was laughing about you scoring on your own net the previous year, hey Stevie? One year later he wins the Cup to make ammends.
Mark Lamb- 17 points in 22 playoff games. Lamb was claimed off waivers from the Wings in October 1987.
Randy Gregg- The Doctor. Oiler vet.
Craig Muni- His 4th season with the Oilers. Signed as a free agent by the Oilers in August 1986.
Charley Huddy- with the Oilers since 1980.

Bill Ranford- Was unbelievable in the 1990 playoffs. Won the Conn Smyth Trophy. Ironically, he was playing against the Bruins' Andy Moog in the '90 playoffs. Ranford was traded to the Oilers along with Geoff Courtnall in March 1988 in exhange for Andy Moog.
Ranford was so good in 1990 that Grant Fuhr ended up being his backup.

The most amazing thing is how much Mark Messier emerged out of the secondary role behind Gretzky after the trade, scoring a career-high 129 points and winning the Hart Trophy.

Gretzky was right. The Oilers were good without him.