Pressure mounting on Sundin to make a decision

Share All sharing options for: Pressure mounting on Sundin to make a decision 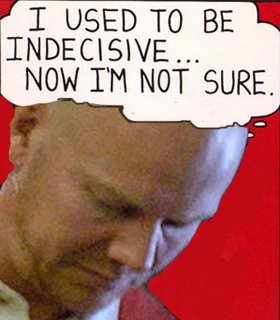 From the Ottawa Sun: A league executive told the paper:

"We just want him to make a decision because he's holding up the business of the league right now. There are teams that want to make deals, but they can't do anything until they find out where Sundin is going to go."

"I'd just like him to do something so I can get a few things done myself," said the executive. "The longer this takes, the longer it's going to be for teams to get their rosters settled."


UFA's like Brendan Shanahan and Glen Murray are said to be "waiting on the sidelines" until Mats makes up his mind because teams that want Mats are waiting. (Maybe Shanny and Murray are not signed yet because they are potentially overpriced considering the lackluster seasons they had last year.) Other teams that are trying to shed salary, (like Anaheim moving Matthieu Schneider) are in limbo because they can't move a salary like Schneider's to a team that is waiting to hear from the Swede.
I say: Bring on the pressure.Sundin has had plenty of the time, as the Leafs never even made the playoffs. Plus, if he's going to hold off on a decision until Christmas for example, then he should just come out and say it.
At the same time, Sundin can't be 100% faulted. He has never told any team that he could/would sign with them. He has been consistent in saying that he not sure about what he is going to do. He doesn't owe anybody anything except maybe the convenience of a decision. He also said weeks ago that he'd like to make a decision in August.So I can understand both sides. GM's are going to pressure him so they can finalize their rosters. Sundin, who has been working out but not skating yet, needs to make a life-changing decision.
JP Barry must be answering his phone 24-7 from these GM's. He is going to try squeeze some info out of Sundin soon.

"We're going to talk to Mats in the middle of this week and try to get a feel for where he's at," said Sundin's agent, J.P. Barry. "There's no timetable for a decision. We're just going to try to see how he's feeling."

So expect some news from Barry within the next 24 hours. And I'll bet that news is nothing that we have not heard already.

Oh, and gee thanks Larry Brooks for clarifying that the Rangers won't trade Gomez.

...the Rangers have never considered trading Scott Gomez to clear cap space for Sundin. Nor will they.