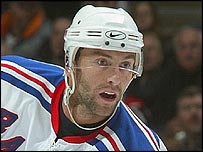 Petr Nedved was drafted 2nd overall by the Canucks in 1990. After that, over the span of about 18 years, he has played with more teams than a puck bunny. According to Aftonbladet, he is being invited back with the Rangers to try make the team.
Original linkTranslated link
Nedved is famous in Vancouver for being a shitbag. Not only was he a lengthy holdout in his final days as a Canuck, but apparently he also asked for Wayne Gretzky's stick after the Kings ousted the Canucks in the playoffs in 1993. This after a gutless 2 goals in 12 playoff games.
It's about time that teams just let this goof rot in Europe. I guess his 20 goals in 42 games for Sparta last season has the Rangers thinking "jackpot." Well snap out of it!